What Doyle Brunson means for poker, that is Ken Uston for Blackjack. Ken Uston is probably the most famous name in the world of Blackjack. Anyone who has become a successful player thanks to counting cards knows this name and he still remains the icon of this popular card game today.

Ken Uston is primarily known as the pioneer of Team Blackjack. His strategy consists of an organized team of players who sit at the table and count cards, placing only small amounts. Then, when the deck is tilted to the players, a signal is given to the big player who comes to the table and stakes large amounts.

MIT blackjack team has become immensely popular in America. Thanks to the perfect mastery of Uston's technique, this group managed to win millions of dollars in American casinos. 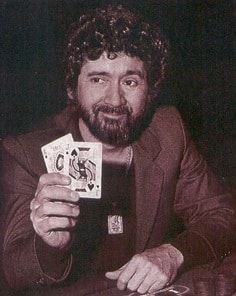 In the eighties, Ken became literally obsessed with arcade video games such as Space Invaders or the well-known Pac-Man. These games worked on the principle of ever-repeating patterns to learn. Once that happened, the game was easily defeated.

Uston used his knowledge and wrote a book - Mastering Pac-Man, which became a huge hit in America.

Books from this legend like Ken Uston about Blackjack and Million Dollar Blackjack are still sold today. Unfortunately, Uston died in 1987 at the age of 52 from a heart attack.