Video poker is a great game for all those who are slot machine lovers on the one hand, and on the other hand, they like to have the game under control and don’t want to leave the outcome of the individual game rounds to chance.

If you enjoy poker, then definitely do not miss its machine variant in the form of a video poker game. Your task in this world-famous game is, just like in classic poker, to create the most powerful combination of five cards. Just like slot machines, video poker is also very easy to use. Strategies may help the player achieve higher wins.

The basic rules of Video Poker are very simple. Primarily, each player has to decide how many coins to invest in the next game (in the range of 1-5 coins). He is then dealt five cards (the game is played with one deck, a total of 52 cards) and after evaluating them, he decides which ones to keep and which will be discarded. The cards discarded by the player are then replaced by new ones. At this point, the result is evaluated and any respective winnings will be paid out in the total amount depending on the final hand.

Virtual Poker boasts a great deal of game variation, with house edge typically not exceeding one percent. This is a very similar situation to BJ. Probably the most profitable option is Jacks or Better Video Poker with the house edge of 0.46%.

One of the most notable features of Video Poker is its entertainment value. It offers a very fancy alternative to the often long and bumpy road to meeting the BJ wager requirement. But this game also bears at least a minimal chance of building a Royal Flush to raise the level of your poker account to a higher financial level.

Each of the VP variants is specific and therefore must be approached in a completely specific manner. Success will depend, in particular, on the ability to choose the right game strategy and the corresponding pay table (see below). The most famous variants of this game include the aforementioned Jacks or Better, then 10's or Better (10oB), Aces and Faces (A & F) or Deuces Wild (DW).

If you don’t have any experience with Video Poker so far, you might want to use the free play option most casinos offer for Video Poker - the so-called "fun" mode. This way you can learn how to play video poker very easily (and especially free of charge).

Paytable is one of the most important concepts in the world of Video Poker. That's because the Paytable directly determines how much you'll be paid for making up one of the valued hands. The pay table, which is referred to as "Full Pay", means the highest possible payout ratio. Casinos use many pay tables to be able to tune the game and the house edge, so you'll usually encounter lower values. Often, there is such a steep drop-off in payoff ratio that house edge rises to around 5%, which is a ratio more akin to slot machines. Therefore, checking the Pay Table value is a crucial and decisive step, and your goal should always be a table offering full pay.

The probability in viddeo poker

In all Video Poker variants, you should choose the "Max coins" option and always bet the maximum number of coins - which is 5. Absolute differences in the values of individual prizes - depending on the number of bet coins - are especially notable when you get one of the better hands. When completing the Royal Flush, there’s an enormous difference between the winning amounts for a bet of 4 and 5 coins. Using the standard calculation, the payout value of a 5-coin bet and a Royal Flush would correspond to 1,250 coins. The amount of coins paid out by the casino in such a rare opportunity is much higher - 4,000 coins. The aforementioned amount can be seen as a jackpot, which is paid when the highest possible hand is achieved at the maximum possible bet. While your chances of creating a Royal Flush are scarce in the short term, you’ll surely get one if you play longer. If you follow a betting schedule with a standard five-coin deposit, the highest possible winnings in the situation described above will be guaranteed.

In most casinos, however, the choice of the number of coins to bet may not be the only possible game setting. Often they also allow you to change the financial value of individual coins - usually, you can use a coin with a price of $0.25, $0.50, $1.00 and $5.00. So instead of betting one $5.00 coin, you can choose five coins - $1.00 each - to guarantee your chance to claim the jackpot. 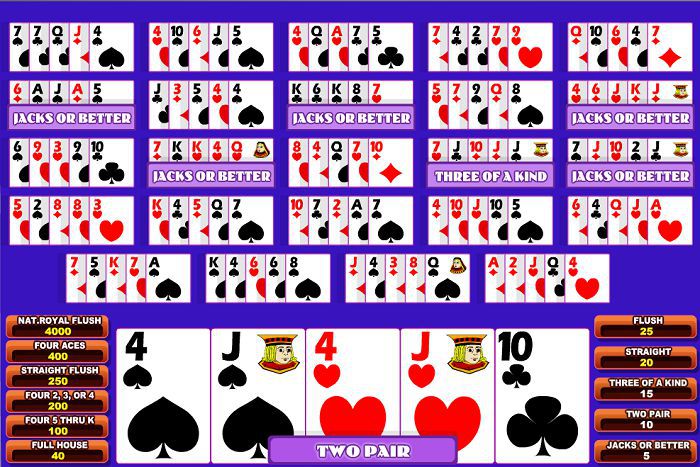 Some game servers also offer so-called Multi-handed Video Poker. The basic variant is a "4-handed" VP, but the number of games played at the same time can be over 10, 50 up to 100 hands. Each of these hands is initially processed in the same way as playing only a single game. The cards you hold will remain the same in all of your hands, but the number of cards you have discarded will be added to each of your hands from a separate deck of cards.

Most players choose a basic sum of primary bets worth $2.50 - $5.00. This means that if you’re playing the JoB VP 4-handed variant and you invest a maximum of 5 coins in each game, the price of a single coin must be set to $0.25. The total value of the complete bets will then be exactly $5.00 according to the following formula:

This is the best way to play Jacks or Better. Follow the table below carefully. When you see the cards in your hand, keep those that are marked here. Sometimes you can see the hand marked with the letter "s", which means that the hand must be of the same suit - in other words, you have the chance to get a flush.

At first glance, the table may appear to be quite complicated. With just a bit of exercise, you will certainly be able to use it. The best way to learn the table is to sit down at the computer with the printed table and play for free using the so-called fun money. You can play Video Poker for free in almost every online casino. After a while of training, you will find that playing Video Poker according to the optimal strategy is not at all complicated.

Sometimes you may think the table is wrong. For example, many beginners tend to keep a good kicker (high card, often ace) when they hold a pair. That may be a good tactic in the five-card draw variant, but it's not a wise choice in Video Poker. So read the table carefully to keep the house edge at a minimum.

Below you can see the payout scheme for Jack or Better, the most popular version of Video Poker, in both brick-and-mortar and online casinos. Remember, in order to achieve such ratios, you usually have to bet the maximum allowed amount.

A Video Poker machine with progressive jackpot is, in fact, a relatively large number of machines that are connected together. A small percentage of player bets goes into the jackpot, which is then won by a single lucky man who has managed to build a strong hand (usually a Royal Flush).

The key point for a seasoned Video Poker player is to track the current value of the jackpot and to verify what standard payout schemes the game has. Based on these factors, he can decide when the right moment to enter the game comes.

Asking yourself whether such situation ever happens? Of course, it does! Visit one of the casinos we recommend, choose one of the many Video Poker machines and count. Soon you will realize that this calculation makes perfect sense!

As far as house edge is concerned, playing video poker is undeniably better for the player over slot machines. While on classic slot machines the returns for players are around 96%, video poker offers returns of around 99%. And some even more.

Mathematical analyses have shown that there are even games that exceed the magical limit of 100%. Specifically, these are:

There are, however, a few things to keep in mind. These numbers apply only if the player follows the optimal strategy for each game without exception. In some cases that can be quite complicated and, moreover, strategies are unique for each variant.

Additionally, even though these games return to players over 100% that does not mean you can’t lose your whole payroll. Just like you can win games with a house edge in the short run, you can also lose games with a player edge.

Just like other games, you can find it in both physical and online versions. In recent years, similar to slot machines, the popularity of playing video poker game online has been on the rise. That’s because it has many advantages:

Video poker is a game for those who do not have the craving or knowledge to sit down at the physical poker table and play against real live opponents and their tactics and strategies. For a beginner or a player who is not lucky on that day, a game at the table may end up a disaster.

Playing video poker means keeping the game under control. The win is largely determined by the player's knowledge of winning combinations and willingness to take a risk. By the way, video poker can achieve long-term returns of 99.5%. Even if you’re not lucky, you will just about keep your balance.

That’s a good reason to take advantage of the welcome bonuses offered by the online casino under this article, right? 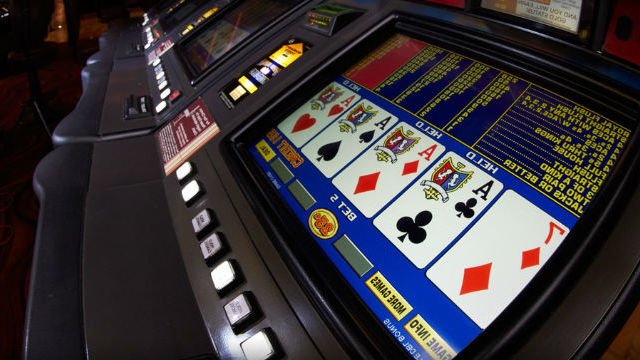 Video Poker
Why Online Casinos Offer a Beatable Versions of Video Poker?
Video poker is one of the few games in which, it is possible to turn the advantage of the casino to the side of the player. There are only a... 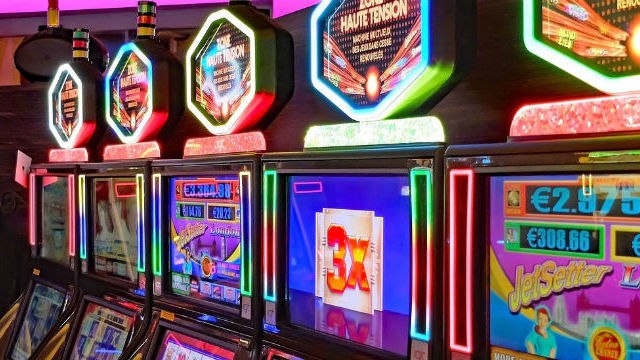 Video Poker
How to Find the Best Video Poker
Most video poker players just come in front of a machine and start playing. But that is a big mistake. The first thing you should always che...