Casino games like roulette, blackjack or poker are more or less familiar to everyone. However, some big casinos also offer games that even experienced players may not have heard of. One example is Let It Ride. A poker-like card game that was a long time ago, especially in the USA, quite popular.

Let It Ride is a card game that uses the ratings that you can know from poker. You are not playing against other players or the dealer. The player only bets on the fact that from three of his cards and two common ones he forms a winning combination, which is taken from poker. The lowest possible hand is to win a pair of tens. Anything lower loses.

Despite its name, Let It Ride has a slow flow. Thanks to that, the game was very popular, especially among seniors and beginner players. In the last ten years, however, the popularity of Let It Ride in casinos has begun to decline. This is because the card game has a relatively high house edge, which reaches 3.51% when using the optimal strategy. 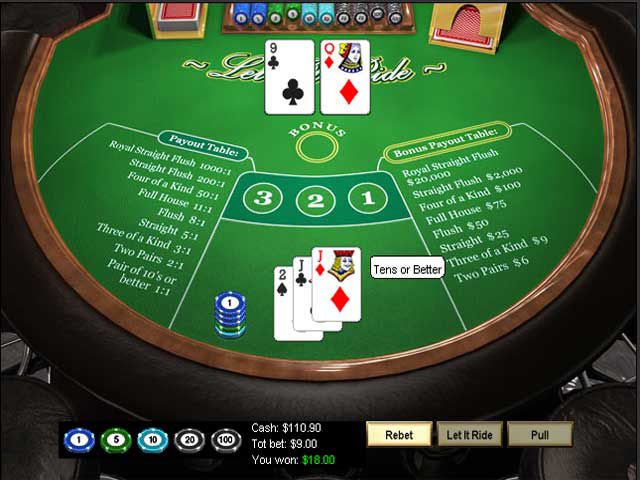 How to Play Let it Ride

The optimal strategy for Let It Ride

As you can see, this is a straightforward game, where the only decision with which a player can influence the game is to decide when to remove or when not to remove one or two bets.

When to continue the game with all bets with three cards

When to continue the game with all bets with four cards

*** Outer straight describes a situation where a card with a minimum or max value of the order is missing from the straight (e.g. 4, 5, 6, 7)

**** Inner straight describes a situation where a card is missing in the middle of the straight (for example. 4, 5, 7, 8)