Edge Sorting - How Professionals Cheats in a Casino

Various advanced techniques in casinos are not used by shady existences but also by mathematical geniuses from MIT. Professional players are also trying to win over the casino in every possible way. Today we will introduce you to a method called Edge Sorting, which is used by many professional players.

So what's up? Edge sorting is one technique that gives card game players the advantage by tracking and exploiting natural inconsistencies on the back of cards. Many decks of cards have slight flaws in that the edges and have a different cut pattern than others. 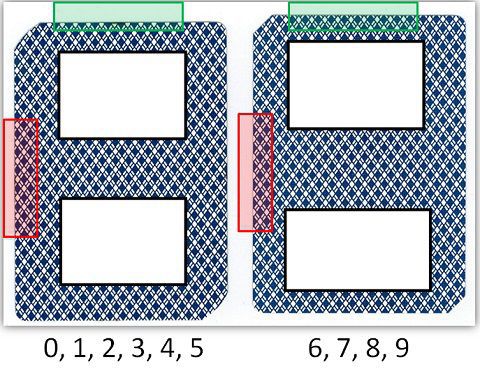 This error can be easily used to identify some cards. For example, a player may know what is hidden under the hole card in blackjack. Which, as you probably know, is a pretty big advantage.

If the player notices asymmetries in the patterns, he will try to arrange the cards, for example, so that full diamonds on the back pattern of cards are turned in one direction on important cards, etc. They often manipulate the dealer and force him to turn the card in a specific direction. The superstition argument is commonly used. The cards need to be shuffled in a mechanical card shuffler where the cards do not rotate, as is the case with manual shuffling.

The player watches the cards and tries to sort them according to his needs. For example, in baccarat, the key cards are 6,7,8 and 9. So if a player knows in advance that the first card will be one of the most important, he immediately knows if the player or the banker is more likely to win. According to estimate, a player using Edge sorting can gain an advantage over the casino up to 6.75% in baccarat.

What is Needed to Use Edge Sorting

Whether edge sorting is legal is a relatively controversial and debatable topic. Casinos consider it as cheating and refuse to pay out. However, the same goes for counting cards in blackjack, and that is legal.

Fortunately, we have several court hearings here that we can rely on. Specifically, the decision of the High Court in the UK, where the casino was sued over £ 8 million by the well-known professional player Phil Ivey. According to him, edge sorting strategies and the use of errors on the cards should not be punished. Like biased roulette, asymmetrical cards are the property of the casino, and if the casino fails to provide useless play resources, it is his fault.

However, the High Court ruled otherwise, and Ivy's winnings were not paid out. The leading role here, however, was that Phil Ivy manipulated the dealer and forced him to turn over the cards as needed. From this, it can be concluded that the next possible court disputes regarding edge sorting will be resolved in favour of casinos.