Today we will analyze one of the more interesting roulette systems – the Tertius system. In the following article, we will explain to you with the exact inner workings of the system, but more importantly its success rate in reality.

The roulette system Tertius is widely considered a professional system. Unlike regular, simple systems, it involves money management, which is supposed to counter the negative side of variance even in the long term. You bet on the color (or odd/even, small/big), beginning with one chip and continuing based on the principles of the Oscar’s Grind system. This means you continue betting the same amount when you lose, but increase your wager by exactly one chip in case you win. You do this until you are in the black, and then you reset your betting amount to the original one chip. The Tertius System, however, differs in that we also note our number of losses in a series.

If the loss/win difference reaches 6 (for example 4 wins and 10 losses), you proceed to the second level, which means we keep on playing, but we increase our wager by two chips instead of one. Should the absolute amount of losses in a series reach twelve, the third level begins, in which the wager is increased to three chips. It is recommendable to keep track of your wins and losses on a separate sheet of paper. You can use the method of crossing out losses, so say you lose five times, you write down: 1-2-3-4-5. You then win twice and you simply cross off the first two losses, leaving you with 3-4-5.

You can therefore easily determine the amount you should wager. Often times you will reach the plus column earlier than you’d think because you wager the same amount when you lose, but a larger amount after you win. Hence, if you lose five times in a row, you lose five chips, but if you then win three times, you gain six chips, putting you up one chip for the series.

The Tertius System, however, has a safety brake in the form of a stop-loss. Before you begin playing, you set a maximum limit you are willing to wager, for example, 100 chips. After every loss, you add up your row and if the sum of all remaining numbers exceeds our starting capital, we immediately end the series and start a new game.

To sum it up, we use the Oscar’s Grind system and keep track of our losses in a sequence of numbers. If the difference of losses to wins reaches 6 (in other words, when we have six numbers that aren’t crossed off in our row), we proceed to level two (increasing our betting amount from one chip to two). Once 12 losses are reached, we increase the wager to three chips. It is possible to go straight from level one to level three. The game ends and we reset our wager to one chip as soon as we are in the black, a whole row is crossed off and we have nothing left to wager, or if the sum of the row exceeds our starting capital.

It is very difficult to translate this playing style into numbers. We will later empirically derive certain probabilities, but for now, let’s just take a look at what results the Tertius System may have. Assume our starting capital to be 100 chips and we will test the system based on a sample size of 25,000 spins:

As the above diagram illustrates, the graph's development is not exactly favorable for the Tertius system. Unfortunately, the entire graph is in the negative area. Let's try to change this a little by applying a linear sequential progression. After each series where we incur a loss, we increase the bet by one chip. Upon reaching the profit section, we reset our wager back to the default value. Let's see what this does to the system:

Again, unfortunately, the Tertius System looks bleak in the long run. Occasionally there are periods of growth, but the extent of this growth is within several thousands of chips. For the most part, there is a steady downward slope. Let’s look at some empirical data in an attempt to look at the system in terms of probabilities. Based on 10,000 sequences (about 50,000 spins) with a starting capital of 100 chips, we extracted the following data: 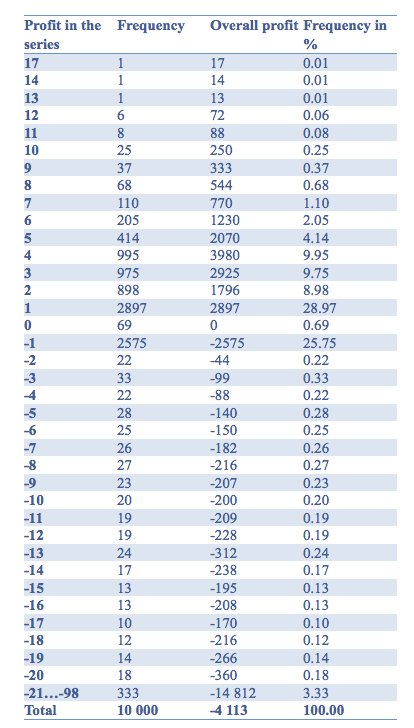