The 300 gambling system is named after a certain amount of units which you bet in your initial stake; therefore this system is relatively demanding on the money. 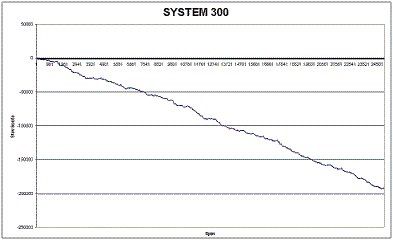 According to our test simulation a reality of this system correspondences with our statistical assumptions. Unfortunately, this is a horrible finding. We have attempted to apply a linear progression, it meant that after each losing series, we increased our bet size by 300 units until we made a profit.

In reality, it is impossible to wager such large sums of money due to certain table limitations etc. but we have decided to try this attempt at least theoretically. 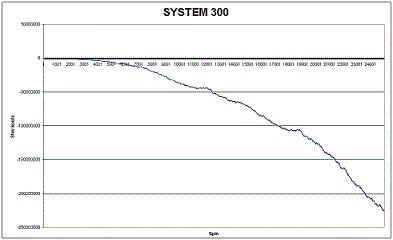 No spectacular results were observed. This progression did not work well... So a huge slump was present, hardly any system could go so deeply below zero. We have also tried to apply «waits strategy».

We were waiting until one of those 3 uncovered numbers hit once or 2 times in a row and then we started betting using the basic version with no progression): 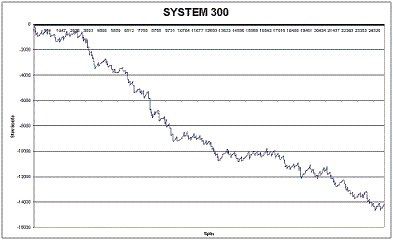 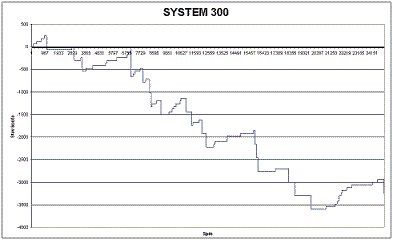 Therefore, we could observe that with exception of some temporary incremental sections, this system went constantly below zero and did not make a profit in the long run. There was no point in applying the wait factor of 3 because of too long waiting periods (approximately of about 10.000 spins).

So then we have attempted to apply again «waits strategy» but we tried to add a linear progression (wait factor of 1 and wait factor of 2, as before) and progressions are shown on the following graphs: 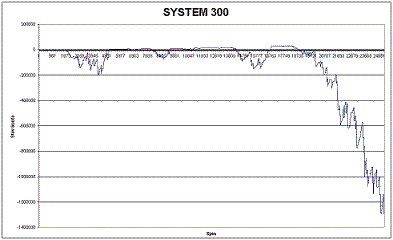 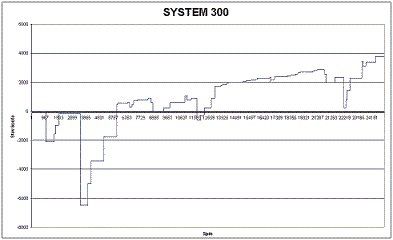 So this was again unsuccessful and the system did not work so well. There was a big danger of huge losses. By using the wait factor of 2 we could even observe the upward trend and even if we managed to result in profit per even more then 100.000 spins, then a huge slump always occurred and the values plumped down.

The following graph shows another demonstration of the gentle progression. After each 10 losing series, we increased the stake by 300 units. 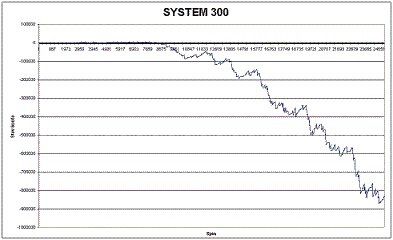 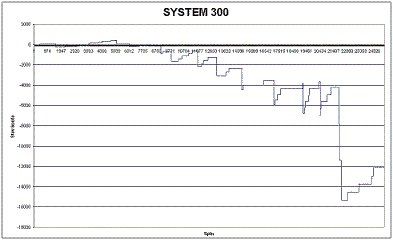 Unfortunately, this did not turn out to be successful either. This system needs a new progression, but we are afraid that this system appears to be hardly usable and we, therefore, conclude that this roulette betting system is completely impractical.