This system called System of 5 numbers is played in the relatively simple way. You choose any 5 numbers and you keep betting on them. The basic series consists of 17 spins with the following progression: in the first 7 spins bet by one unit on each number, in further five spins your bet by 6 units on each number and then you bet 3 times by 11 units and finally 2 times by 16 units. Total bankroll is 510 units altogether.

On the following table you can see the system from the viewpoint of the probability and the expected profit:

Unfortunately, the expected profit resulted in a loss, therefore in the long term, the system should go below zero. Let’s have a look at the progression of the basic system on the following graph: 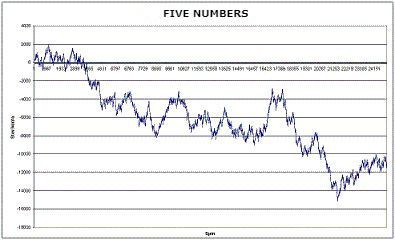 Our expectations became true and in spite of the short-term growth, the system sloped downward, (it had a downward trend). There were several options on how to modify the system but we were not able to apply all of them.

There was no point in altering the series length. It follows (from the table above) that as long as the series was, always the expected profit results in a loss (we had tested a series of 5 spins and a series of 25 spins). At the first sight, you would assume that there is a chance that you hit at least one number within 17 spins, but empirically based research had confirmed that there were also series when the roulette did not hit any number of a certain pentad 50 times in a row.

Applying the wait strategy would not be also supposed to have a success. We have attempted to apply at least a liner series progression; it means that after each unsuccessful series, we increased the roulette bet size on each number by the value of initial bet and after making a profit we reset the bet size back to initial bet: 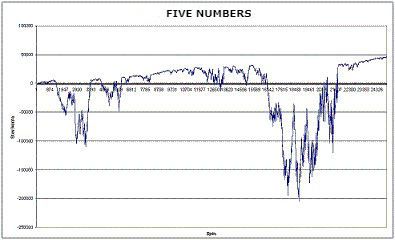 As you could see, the system appeared to go to a plus and had an upward trend but the local slumps were drastically huge and reached values of hundreds of thousands below zero, therefore an idea of series progression was not successful. We have tried to apply some modification by employing a spin progression of the bet in one series in order that a win always reached a minimum value. 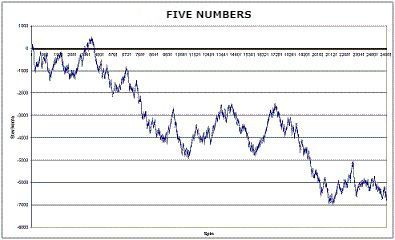