You start the game by choosing one dozen and you bet on all numbers within this 1st 12 by one low unit (so altogether you bet 12 units). If you do not hit one number from 1st 12 either, you continue playing and keeping still the same bet sizes. If you hit then you proceed with following rules:

It practically means that during the game numbers are occupied by high units and low units are eliminated. The round is finished at the moment when all low units are taken away and there are only high units and uncovered numbers on the table. Then you bet again on all numbers within this 1st 12 by one low unit and the game starts from the beginning.

It is recommended for this system to use of a linear progression, so after each losing series, you can increase the value of the low unit by one (and value of the high unit by 2) until you again make a profit.

This was a really difficult issue to estimate what progression the system would have. Theoretically, this system was supposed to work...but further conclusions were made after the practical testing. We have attempted to design a progression and do a test simulation per 25.000 spins firstly without using a series progression as follows: 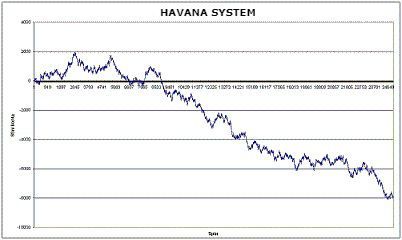 As you could see, the system was not successful without using the progression. We observed a typical downward trend and the average loss oscillated approximately around the value of 10.000 units per 25.000 spins. Therefore it was necessary to apply a series progression and we again tested the system as you can see on the following graph: 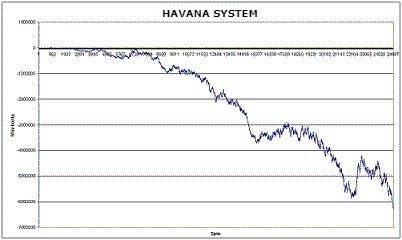 Unfortunately, the progression remained the same as the system headed downward and went completely and drastically below zero (it even reached values of millions of units above zero per 25.000 spin). So this was really horrible finding and means that losing series achieved dominance over winning series. We tried to analyze the sample of series with using no progression in detail.

As you could see, the losing series again achieved dominance over the winning series. The losing series resulted in a loss and reached values of 100 and more units. Therefore this system went unambiguously below zero and is unplayable in this form. It requires further work and improvement if it is to be usable in the long term.

BitDice
100 free spins no deposit
Code not required
Get bonus