Donald John Trump is an American businessman, politician and, above all, the 46th president of the United States. Gambling lovers also know him as a former owner of several leading casino hotels in Atlantic City such as Trump Taj Mahal or Trump Plaza. And it is his casinos that we will focus on in today's article.

Today, almost every child knows Donald Trump. As the president of one of the most influential countries, he regularly appears in the news of all countries of the world. His star, especially from the United States, has been visible since the 1980s, when he began working as president of his father's company, The Trump Organization, buying real estate in New York and surrounding areas.

New York itself was also his birthplace, where he was born on June 14, 1946. He graduated from Kew-Forest School and the New York Military Academy in New York. He then began studying at Fordham University, from which he soon transferred to the famous Wharton School. He then starts his career in a family business. He has declared bankruptcy several times during his business, mostly in connection with Trump's casinos.

In addition to real estate trading, Trump is also active in politics. He is doing much better here. After all, in 2017 he reached the imaginary highest goal and became the 46th president of the USA. He took office at the age of 70 and officially became the oldest president in the country's history. Another presidential election awaits America in the fall of 2020, in which Trump is likely to try to be re-elected.

The infamous attempt by the current US president to enter the world of gambling began in the 1980s when Trump started buying real estate in Atlantic City. In 1982, he obtained a gambling license from the New Jersey Casino Control Commission, which opened the door for him and started construction of the Trump Plaza Casino and Hotel. He built the Plaza casino in collaboration with the already established casino chain Harrah's. Over the next few years, he expanded his portfolio and bought the Atlantic City Hilton Hotel, which he later renamed Trump Marina or invested in the construction of what is probably Trump's most famous casino - Trump Taj Mahal.

In 1995, he founded Trump Hotels & Casino Resorts to which Trump sold the aforementioned Taj Mahal and Marina casinos for $ 1.38 billion. However, casinos were failing. And even so, that he must declare bankruptcy. Several times. This was the first time in 1991. The second bankruptcy, now under the flag of Trump Hotels & Casino Resorts, fell in 2004. After this bankruptcy, the company's name was also changed to Trump Entertainment Resorts.

Unfortunately, even the name change does not help Trump's casinos, and other bankruptcies followed in 2009 and 2014. During these years, Trump Plaza and Trump Marina casinos were lost. The company definitively ends in 2016 with the sale of the last Trump Taj Mahal asset.

Harrah's at Trump Plaza was the first casino to open to the public in 1984 on Harrah's Boardwalk. The complex contained a total of 614 rooms, seven restaurants, a showroom, a health club and a casino with an area of 60,000 square ft. About five months after opening, the casino gets a new name - Trump Plaza. The change of brand was based on the fact that Harrah's casinos were more associated with low-rollers at the time, while Trump Plaza had built 85 luxury apartments for high-rollers.

The casino was not very successful right after opening. In the first half of its existence, it reported a pre-tax profit of only $ 144,000. It was these weaker results that escalated the partnership between Trump and Harrah's management. The whole thing ended in buying the remaining stake for $ 220 million in 1986 when Trump became the sole owner.

A big down on sales comes from the start of the '90s when Trump Taj Mahal opens and most players move to it. In 1992, Trump Plaza even had to declare a prepackaged bankruptcy. Over the next few years, renovations and extensions took place, and in 1995 the Plaza was transferred to the newly emerging business company Trump Hotels & Casino Resorts.

The casino did not perform very well in the following years either, and in 2011 a decision is made whether to sell the casino, and the hotel and Trump Plaza was definitively closed down in 2014. 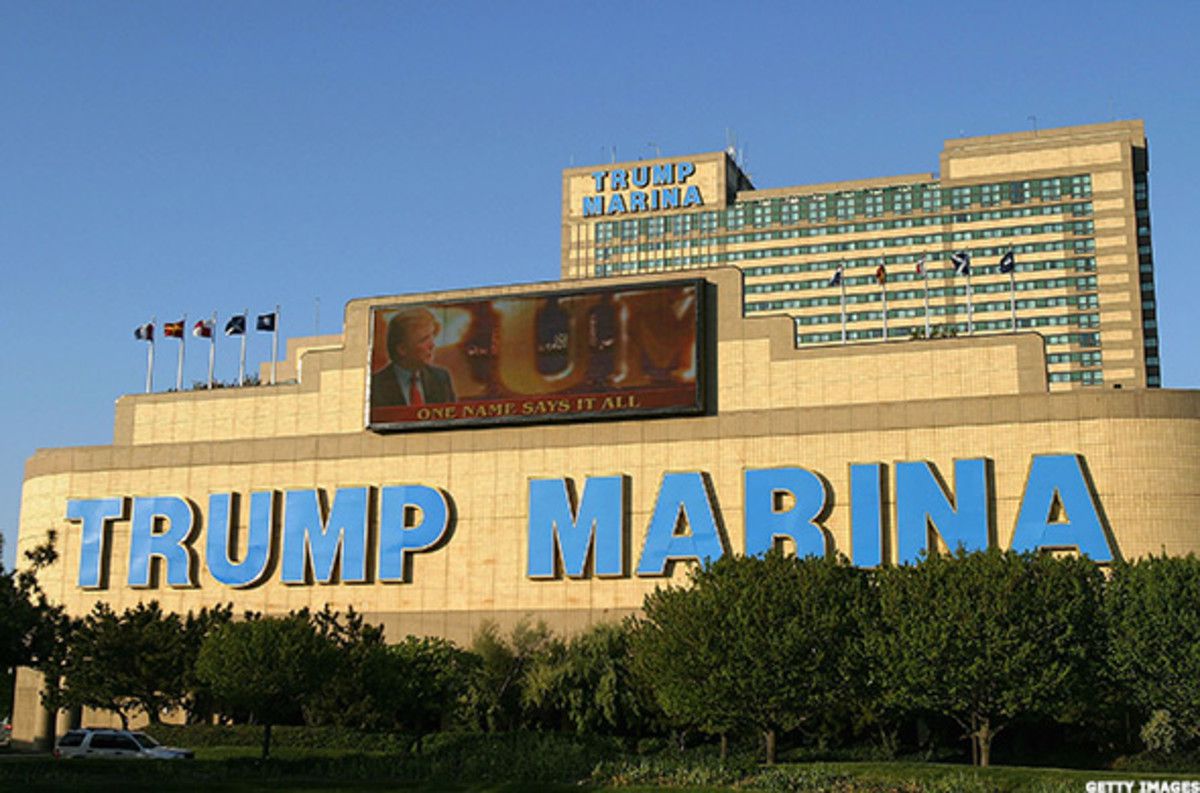 Trump Castle or Trump Marina, as the casino will be called later, is the second Trump's casino. Hilton Hotels originally built the complex, but a gambling license was denied just before the construction was completed, on suspicion of being linked to organized crime. The whole complex was, therefore sold to Donald Trump.

Like Trump Plaza, Trump Castle began to have financial difficulties in the early 1990s due to the opening of the Taj Mahal Casino. In 1991, the casino did not have enough funds to pay off liabilities to bondholders, so Hilton Hotels offers to buy the hotel for $ 165 million. However, Trump disagrees, and instead, the bondholders acquire a 50% stake in the company. In 1992, Trump Castle declared prepackaged bankruptcy.

In 1993, Trump bought a 50% stake from bondholder, and again became the sole owner of the complex, and in 1996 sold the casino-hotel to the newly formed company Trump Hotels & Casino Resorts. A year later, the hotel brand changed, and a new Trump Marina casino is created.

Since 2008 there was a negotiation about selling the casino, which happened eventually in 2011 when Landry bought it from Trump and changed it into the current Golden Nugget casino. 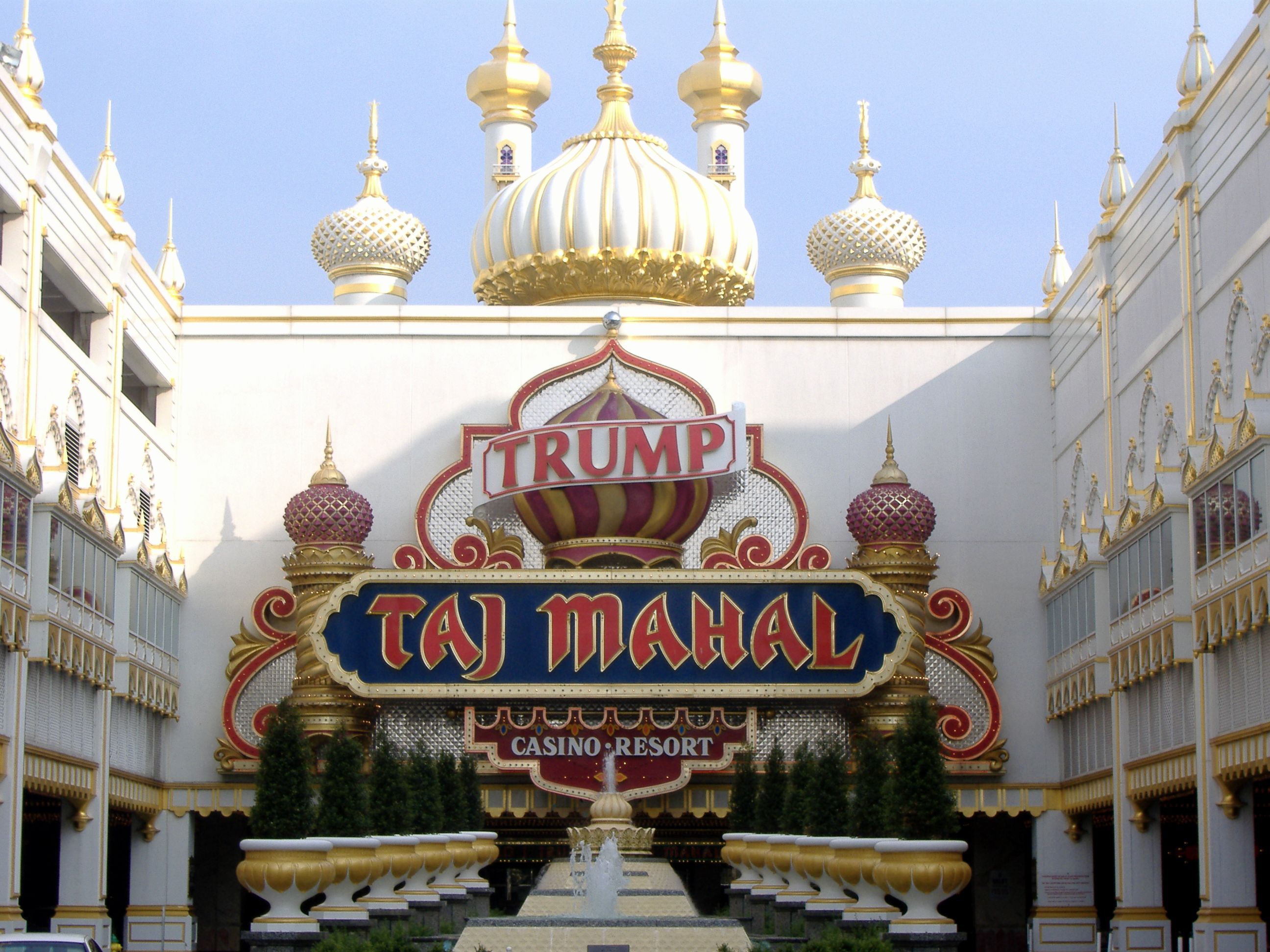 Trump Taj Mahal was the third casino owned by the current president. The constructions began in 1983. Three years later, however, James Crosby, owner of Resorts International, which owned the neighbouring casino, dies. The company's heirs had no experience with similar projects and were therefore unable to complete the construction. Donald Trump, who already owned Trump Marina and Trump Plaza, became interested in the company and the growing casino under construction.

After various ups and downs, the current US President finally manages to buy the Taj Mahal complex for $ 273 million. Trump Taj Mahal officially opened its doors to players on April 2, 1990. At the time of the opening, 120,000 square ft. was one of the largest casinos in the world. However, even this did not prevent the prepackaged bankruptcy that came in 1991.

Like Marina casino, in 1996 the Trump Taj Mahal was sold to a newly formed company, Trump Hotels & Casino Resorts, for $ 890 million. Until the opening of Borgata Casino in 2003, Trump Taj Mahal was the most profitable casino in Atlantic City. The casino then operated for another 11 years until Trump Entertainment Resorts (formerly Trump Hotels & Casino Resorts) went bankrupt. Trump Taj Mahal then definitely ended in 2016. At least under Trump's leadership. In 2017, the casino-hotel was sold to Hard Rock International, which opens it under a new brand as Hard Rock Hotel and Casino Atlantic City.