How to Play Craps without dice - with Cards

In some US states, games which results is determined by rolling the dice is prohibited. Surprisingly, this is not one an old law. It came into being in the United States more in 2004. Local casino operators have figured out how to outwit the legislative. They use cards instead of dice.

How it is possible to allow to play cards and not craps is beyond our comprehension, but the US is a land of unlimited possibilities, so it is not surprising. You can meet these rules in California, where there are mainly casinos in Indian reservations.

First, you can see the game of craps completely without dice. Instead, classic cards from ace to 6 are used. The number of cards played will then vary depending on who shuffles the cards. It is traditionally played with 8 cards of each value. In total, there are 48 cards in the deck. In some cases, however, when the cards are shuffled by the machine and not by the dealer, then the deck can have up to 243 cards.

The shoe has a cut card, similar to blackjack. Due to the nature of the game and the rules, it is possible to modify the blackjack counting systems and use it.

The game then begins and continues as with craps. Except the dealer draws cards from the box, not the player. If no point is established, players bet the basic come/pass bets. 7 and 11 wins for the pass bet, 2,3, and 12 the players lose. Any other number sets a point that must be hit again, and it is also an opportunity to place internal bets.

However, as we mentioned in the previous paragraphs, this type of gaming is not very advantageous for the casino. As the number of cards in the deck changes, so do the probabilities for each combination. Advanced players can use this mathematically proficient and increase the chances of winning by counting the cards. Therefore, there are other types of card-craps.

The second modification, which we will present here, is the patented operators of the Quapaw Indian casino. In this case, as in the previous one, only cards from ace to 6 are used. This time, however, the cards are no longer in the deck, but only 12 cards are played, i.e. with two sets.

The cards are placed face down in two rows of 6 before each "roll", each row contains cards from ace to 6. The player who is "the shooter" then announces two numbers from one to six aloud. Each of these numbers then refers to one of the series. The first number to the top row and the second number to the second row. From left to right, the respective number is counted in both rows and two cards are turned over. See. picture

The player announces the numbers 1 and 6. 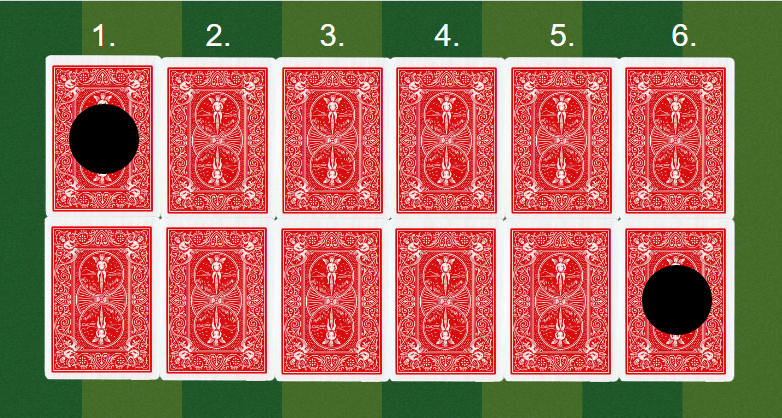 Combination of Dice and Cards

The second version is already better than the first because there is a higher element of randomness. There is still something missing. It lacks what has been missing from the beginning. The dice. Craps is not so popular due to its uniqueness and number of bets. The most attractive thing about the craps is that it is a game and above all a physical roll of the dice. Respectively enthusiastic expectations and a rush of adrenaline as the dice roll on the board and bounce off the back edge of the table.

Although you can play dice with cards in this way, it is simply not the same. However, other casinos came with inventive modifications. The dice determine the cards and only then display the winning values. So it's not technically a violation of the law, and players can continue to blow dice for good luck and shout out the legendary: "Baby needs a new pair of shoes!"

How to do it? As with the announcement version, only 12 cards are played, which are sorted in the blue and red rows by 6 cards each. The shooter then rolls a red and blue dice. The number on the red dice then turns over the appropriate card in the red row, and the blue dice does the same with the blue row. All other rules of craps remain classically the same.

The craps variations described above may not be the only ones you can play. The individual systems are often patented by California casinos, and sometimes it may be easier for a new casino to come up with its version than to buy patent rights for a patent.