Another betting roulette system trickily named the Dominance hides a simple system using comparatively a quite interesting progression. How the system performed in long-term testing, you will find out by reading the following article. 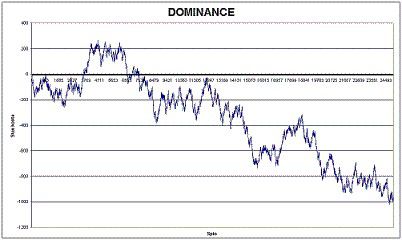 The graph shows that in the long term this system (in this form) really went below zero. There were some positive moments and a loss was not so huge – a loss reached values of about 2000 units per 25.000 spins. We attempted to apply some modification such as altering the length of the game (shortening or lengthening), but the system did not change. Never mind. We also attempted to apply a classical linear progression of series with expectations of some improvement: 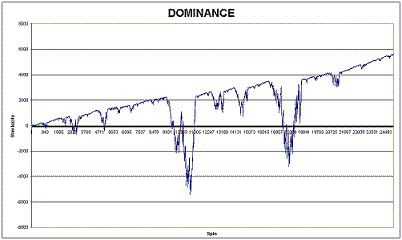 As we had assumed, we observed the upward trend, but local slumps were presently reaching a loss of about hundreds of thousands of units, so it is very dangerous. In principle, this was a type of Martingale progression.

What else could we apply? We attempted to apply a waiting factor. It meant that we did not start betting until the roulette hit our double street at least 10 times or 20 times in a row. What was the result? You can see it in the following graph: 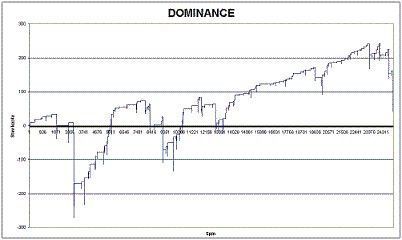 When we applied a waiting factor of 10, we did not observe any strong effect. When we applied a waiting factor of 20, there was a marked difference (the graph was typical “serrated”), but the slumps occurred very often and resulted in a loss of over 10.000 units. Also, there was a huge variability of the interval (in the case of betting on a certain six-figure line) therefore even if we were waiting a long time to hit, we had the certitude that we probably reached bigger losses. It follows that another problem is that the game would be frequently interrupted (because of these intervals). It leads that the system is not usable (due to the time spent by playing the roulette and betting only two times per month...). But it can work well as a part of some complex system using a bigger amount of the gambling systems.
Share article
Share on Facebook Share on Twitter