The system titled the Double 10 does not rank among the most famous systems. However, its principle is enough intuitive and simple and you can see that relatively often in different periods. What results are yielded by testing?

The name of this system (the Double 10) is derived from the way to gamble. You choose one certain number and you bet on that. To start playing, you bet 1 unit and on each 10th unsuccessful spin, you double the bet size as long as you hit the certain number. Then you reset the game back to the beginning and you start to bet again 1 unit. Simple but very prolonged.

It is not possible to express this system precisely mathematically, it would be very difficult, but the statement that on average the certain number should hit every 37 spins is enough for us. As well there are realistic exceptions as the certain number can even hit every 200 spins and more. Let’s see the progression (for our needs was necessary to apply some limitations as a maximum number of the spins in one series, let’s say to 100 spins, because by using the Martingale progression a very huge dispersion of the values occurred, therefore it would not be possible to work with it). 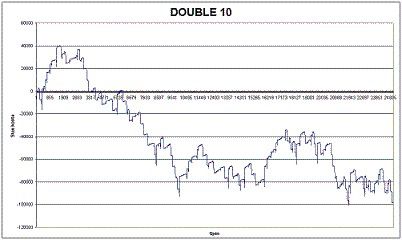 As you could see, the system suggested certain waves and in the medium term oscillated around zero, in the short term the system could even achieve the upward trend. By adding one more and then another series, we found out that within about 100 000 spins finally the losing streaks achieved dominance and in the long term the system went gently and surely below zero.

We have attempted to apply a progression series. It means that after each losing 100 spin series, we increased the bet size by 1 unit as long as we made a profit. 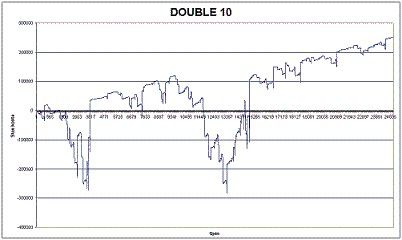 By using the progression above, the system appeared to be as the Martingale progression. Therefore we observed a continual upward trend but very huge local slumps were present.  There was the same progression even if we reduced the length of the series (for example to 50 spins). With the small progression, the system went below zero in the long term, with the bigger progression there was a risk that the bet sizes would get out of our control.

the Double 10 system in this form is not recommended in the long term betting as the system needs surely some kind of modifications such as applying another progression or some wait strategy (unfortunately the effectiveness is not supposed to be such a big due to the fact that a very huge dispersion of the intervals between the numbers occurred – in other words the same number can hit 2 times in a row as what as it can hit once per 200 spins....).