We have tested another roulette system known as Bally’s. If you are interested in how successful this system was in long-term testing, you will find out by reading the following article.

This system is called the Bally’s. It works by putting units on the table in a certain way and if you lose, you use a progression. The principles of the game are:

There are 12 units altogether on the first spin. If you hit, a profit of 6 units is won. If you lose, you multiply all your bet sizes by 3. So altogether you bet 36 units in the second spin, 108 units in the third spin and 324 units in forth spin.  If you lose 4 times in a row, you start again from the beginning.

We have attempted to design a progression. The results of the progression are shown in the following graph: 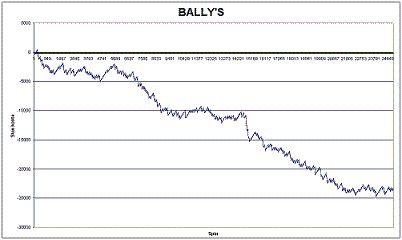 Unfortunately, this did not turn out to be as successful as proposed. The betting system went continuously below zero and it had a loss of 25.000 units per 25.000 spins. The system was unusable in this form. 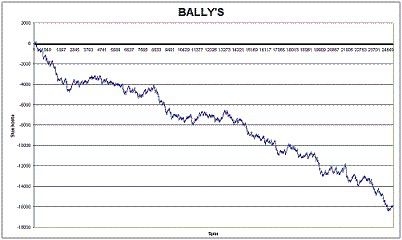 The curve steadily increased resulting in a profit, but sometimes drastically plunged (local slumps) and a huge amount of money was required to cover these losses (the slumps even reached values of 300.000 units). In reality, it is not possible to wager such large sums of money (even if we had access to large funds) due to certain table limitations etc. Therefore this method is not feasible.

We also attempted to apply a progression. We returned to our original plan by applying the 4 spin limitation. After each losing series, we increased the size of the bet by 1 unit. What was the outcome? 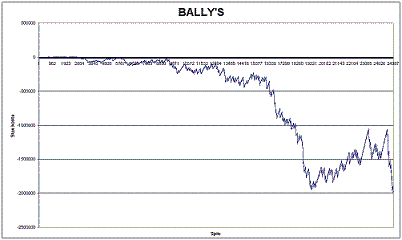 Again, no spectacular results were observed.  The system oscillated around zero much longer, but finally, the downward trend achieved dominance and fell well below zero (a single loss reached values of up to 1.000.000 units), so this was very dangerous…..

This system also appears to be unusable in long-term betting.