The Charlotte roulette system’s principle is very similar to the Double 10 system. The difference is that the system using a progression of stakes. We can tell in advance, that very interesting graphs have been yielded from using this system!

This roulette system is called the Charlotte basically is very simple. You start betting on a certain number until you hit.  You play the game by using the following progression:

On the following graph you can see a progression per 25.000 spins: 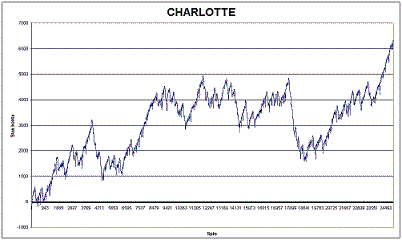 As shown on the first graph the system oscillated enough, but unfortunately, it went below zero and resulted in a loss (albeit, only mildly). Sometimes we observed an upward trend of the curve (just as on the second graph). It meant that winnings in each series depending on in which spin you hit a certain number because a certain profit oscillated from 20 to 80 units (but these 60 units are inaccurate average). Therefore there is an opportunity expecting the profit of higher values, unfortunately, we cannot rely on it.

We attempted to apply some modification such as altering the length of the game (shortening or lengthening), but the graphs did not change in the long ratio and appeared roughly the same. In the case of lengthened series, the upward trend achieved dominance and it was accompanied by the fluctuation of the curve in the long term testing (as Martingale progression). In case of shortened series, the dispersion was decreased but the curve also went below zero.
But this is only empirical finding by testing of over 100.000 spins. The exact statistical calculation would be expressed quite difficult because of a different profit on each spin.

We also attempted to test this system by applying the basic progression of the series. So after each losing series, we increased the size of the bet by 1 unit until we made a profit. What was the outcome? 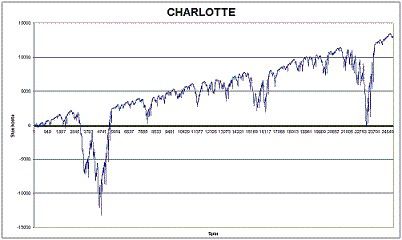 We could observe the upward trend, sometimes accompanied by some local slumps which resulted in a loss in short term. Therefore this variant is still too dangerous, however, the system looks good and it can work well as a part of some complex system using a bigger amount of the gambling strategies altogether.
Share article
Share on Facebook Share on Twitter