In another episode of our periodical articles, we have focused on testing of the gambling system which is not probably so famous to you. It is premised on the recurrence of numbers and we made a simulation of 25.000 spins. What outcomes are yielded by using that system?

In total, you bet on 17 numbers and in the case of double betting on one number, you put only one stake on this certain number. You play a total of four spins, in which you bet still on the same numbers with progression as follows: 1 – 2 – 3 – 6 units on each number. Anytime you win and you make a profit, you start from the beginning of a new series.

To tell the truth, other systems based on a similar principle have not been profitable. Therefore there was no reason to suppose that this system would be successful. As well this system is considered a group of certain numbers which are chosen by a specific criterion and betting on these numbers with a regular progression is almost always a wrong choice….

But we will see. We have tested this system within 25.000 spins and the results are shown on the following graph: 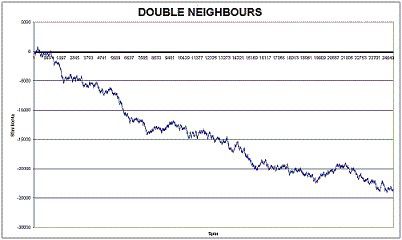 Unfortunately, this did not turn out to be as successful as proposed. The system went unequivocally and uncompromisingly below zero.  We have also attempted to apply some modifications such as altering the betting. We changed the way of betting - instead of betting constantly on the same numbers, the group of numbers was changed after each number that had hit. The effect of the altering is shown in the following graph. 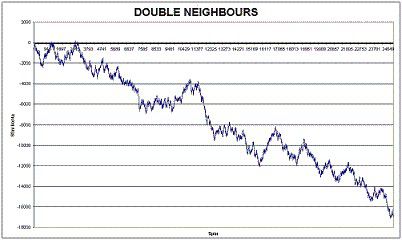 Again, no spectacular results were observed. This system also appears to be unusable in long-term betting.