In another episode of our testing serial, we have focused on another very used system – Labouchere. It may undoubtedly interest you what results are yielded from using of this roulette system.

The system Labouchere is for its efficiency and usefulness one of the most commonly used systems. Basically, this system is very similar to the Fibonacci system and it is played in a similar way.  It is often known as “cross-out system” – you bet on color (or another even-money bet). Your losses are written down in a row and the next bet is the sum of two numbers if you win you cross out these two numbers.  The difference with the Labouchere system (compared to the Fibonacci system) is that you do not bet on the sum of two last numbers in a row, but you bet on the sum of the first and last number.  Therefore a progression is much gentler and also falls much slowly in latter winnings.

Otherwise, its principle is the same – if you lose the bet, a new number is added to your betting series whereas if you win, you cross out two numbers. Due to the facts that blacks and reds occur roughly 50% of the time, so this leads to enormous pressure to cross out the whole sequence to make a profit.

What do Statistics say?

It is not possible to express this system precisely mathematically. It should work the same way as the Fibonacci system. So yes, in case of the unlimited form, there should be the same upward trend but also with observed local slumps as in the Martingale system.  In the case of limitations, there should be a downward trend.  By applying a progression of series it should manage to result in a profit but again with local slumps. But we will see, let’s see our results on the following graph: 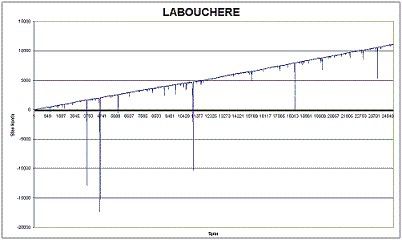 So it really happened, in case of this unlimited form, the system had a typical progression as the Martingale system. By using the initial sequence of numbers (1-1-1-1-1) as in the case which was demonstrated above, we attempted to apply some limitations with maximum losses of 100 and 200 units. After reaching of these losses, we reset the game back to the beginning. 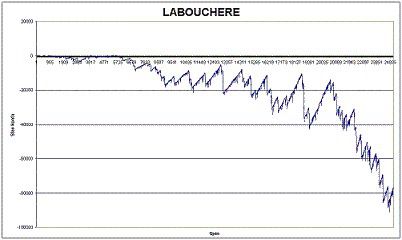 As the graph shows, the system sloped downward as proposed. So we attempted to apply some modifications by using a linear progression.  Following each losing series, we reset and increased the stake by 1 unit until we resulted in a profit. A sequence of numbers was (2-2-2-2-2, 3-3-3-3-3, 4-4-4-4-4, and so on). 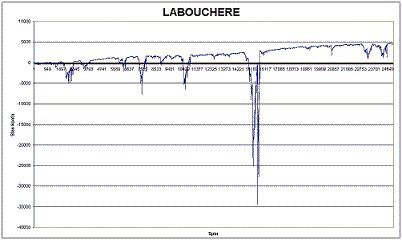 By using the linear progression the system obviously turned out to yield a profit, but local slumps were always present as we mentioned.  Just as in the Fibonacci system’s case, these graphs show that the system requires further work and improvement if it is to be usable in the long term.
Share article
Share on Facebook Share on Twitter