Is this the betting system that you have been waiting for? Is this an interesting system from which you can expect to gain a profit? Has it arrived? How successful was Oscar’s Grind system in a test simulation? You will find out by reading the following article.

What is the Oscar’s Grind system?

The Oscar’s Grind system consists of betting on colors. The difference of this system (compared to other systems of gambling) is that the bet sizes are not increased after a loss, but only after a win. To start playing, bet 1 unit. If you lose, keep the bet the same until you win. When you win, increase the size of the bet by 1, unless that would give a profit of more than 1.
In addition, there is one final detail – If you get close to a profit, don’t bet the total bet size.

This is a really difficult issue to calculate, so we have attempted to estimate it. Logic tells us that it can work successfully as the wins should alternate approximately equally with the losses, and losing streaks should alternate with winning streaks. 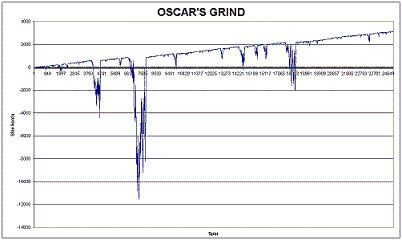 Perhaps the situation is not that simple…

Due to the fact that the winning streaks brought about a profit of about 2 000 units per 25 000 spins, and the slumps (in losing series), reached the values of 100, 1000, 1 000 000 units below zero, all the positive trends were trumped with negative trends, making the system unusable. 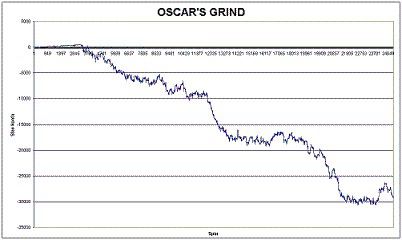 In all three graphs, the progression shows a similar curve (all three look similar), so this was again unsuccessful.

We then tried to add a linear progression after each losing streak, by increasing the bet size by 1 unit. Progressions of the limitations with maximum bet sizes for 10, 50 and 100 units are shown in the following graphs: 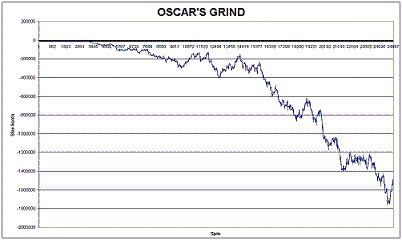 This resulted in no benefit, as only losses were increased by this method. There were some sequences of growth, but the big slumps always occurred at 50 000 spins and took our all profit. The downward trends when using a gentle progression and astronomical slumps when using a more aggressive progression (Martingale progression) make this betting system unusable.
Share article
Share on Facebook Share on Twitter