In the following episode of our testing, we have chosen another interesting system called Parlay betting system. Its principle is different from other systems. You usually increase the bet size after a loss, but with the Parlay system, this is the exact opposite. What results are yielded from using the Parlay system?

Let’s take a look at another system called Parlay.  The system is premised on even-money bets (for example on color) and if you win, the next bet would be the same amount again plus the amount that has just been won. You then wait for several consecutive wins. You play a total of four rounds in the basic version and each series ends after the fourth win in a row. To start playing you bet 1 unit and consequently, you bet 2, 4, and 8 units. If you win in all 4 spins, you make a profit of 15 units. If you lose at least once in 4 spins, you start again from 1 unit. In each series, you actually risk just 1 unit and you have a profit of 15 units in the winning series.

You need to have at least one successful series within 14 losing series to achieve a profit. It looks interesting and the only what you need is to get 4 reds or 4 blacks in a row and this should not be so difficult…

Playing a total of four rounds, there are 24 possible combinations of two colors (black and red, so it is 16 possible combinations (you have abstracted “zero”). But if you are interested in one certain combination, the probability that you hit 4 reds in a row is 1/16 (one successful series receives 15 unsuccessful ones). Therefore if you lose 15 times a loss of 1 unit and you win one time a profit of 15 units, then you have nothing… Sometimes the roulette also hits “zero”. So this system appears to go below zero in long-term betting. 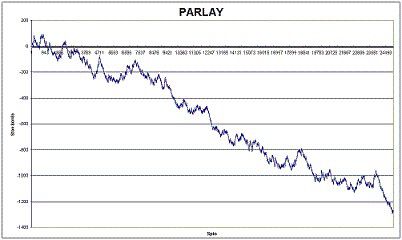 Never mind. We fed our data into a computer and we designed a graph which you could see above.  The progression was according to our statistical presumptions. We went below zero and we had a loss of about 1.500 units per 25.000 spins. We did not stand a chance to reach a profit.

How could we improve this system to be more interesting for us? The easiest way was by applying a progression.  We attempted to increase the initial stake by 1 unit after each losing series until we went again to a profit. How did it look? 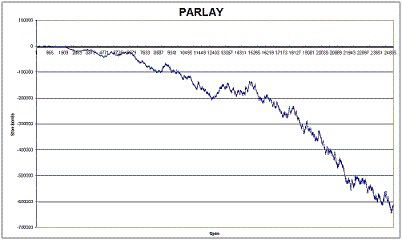 The progression was practically exactly the same. The only result was that the overall loss was increased to about 500.000 units per 25.000 spins. We have supposed that the system can fall well below zero to huger slumps. The loss only increased with a more aggressive progression. We, therefore, conclude that this roulette betting system is not recommended for long-term betting.

Woocasino
25 Free Spins No Deposit
Code not required
Get bonus