In today’s article, we are returning again to your favourite serial about the testing of the roulette systems and we have focused on another, not so used system called the John Wayne betting system.

This system called the John Wayne system is relatively simple. It works by putting just 10 units on the table to cover 18 numbers in the following way: you choose any two numbers (there should be a small distance between them) in the middle column (for example 11 and 26) and you bet one unit on these two numbers. Then each of the corners which are adjacent to the selected numbers must also be bet on one unit.

If you hit one of these corner numbers, you have a loss of one unit, if you hit an adjacent number among corners, then you make a profit of 8 units and in case of hitting one of two selected main numbers, you reach a nice profit of 62 units.

Therefore it should result again in a loss. We have attempted to design a progression: 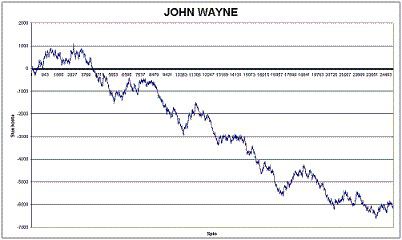 As you could see, basically the system went below zero in the long term. What else could we try?  We have attempted to apply some modifications for example by using a progression. We added a classical progression as follows: after each loss, we increased the initial stake on each number by one unit until we resulted again in a profit. 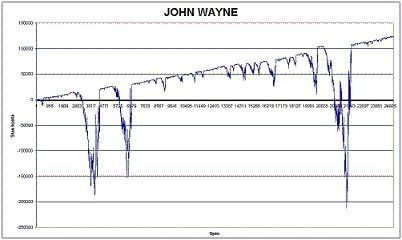 This progression was successful and we observed an upward trend. The problem was that very rapid local slumps were present and these slumps are typical of the Martingale progression.  Unfortunately, in this case, we ended up in a loss of 300.000 units per 25.000 spins and it could be even worse. we could reach a loss of even 1.000.000 units below zero. Therefore, this system is not probably feasible in the long term betting.
Share article
Share on Facebook Share on Twitter