The Numeric Scanner is a very special system based on a relatively interesting idea. How successful this system was in our testing, you will find out by reading the following article.

The Numeric Scanner is premised on the recurrence of numbers. The main idea is that within 37 spins some numbers do not hit only once, but some numbers can hit several times and some of them do not hit at all. This is the real fact and we can work on it. This system is based on the assumption that within 12 spins at least one number hits more than once.

You start betting on one number. The roulette spins and you bet 1 unit on the number that hit. On next spin, you bet again 1 unit on two last numbers. Then you bet on three last numbers and you continue with this way as long as some numbers hit for the second time within these 12 spins. After a win (or a loss) you start playing again from the beginning – the roulette spins and you again bet on the number that hit.

Unfortunately, our calculations did not bring any positive outcomes. In the long term, the system should go below zero, but we will see. We also have attempted to test the system within 25.000 spins:

As you could see on the graph above, the system definitely went below zero. We also have tried to apply the obligatory progression. It means that after each losing series we increased the bet size by 1 unit until we made a profit and then we reset the stake back to initial one unit: 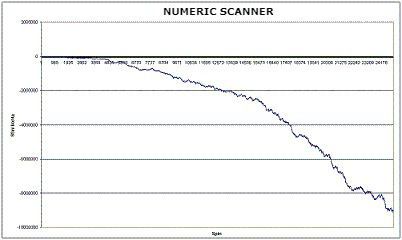 Unsurprisingly the progression was exactly the same. Using the linear progression did not help us, only we went below zero faster by this method. There was no effect even if we applied some modifications such as altering the number of spins in a series to 10 spins, 8 spins or 4 spins. No spectacular results were observed.

The progression did not change.  We also have attempted to apply (only theoretically) the aggressive Martingale progression, but let’s not expect too much from that: 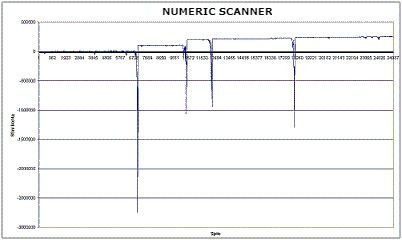