Baccarat's main features include high bets between two opponents, one of which is a "banker" and the other "player". The object of the game is to get closer than the other player to a total of 9 using two or three cards. In fact, no special skills are needed, the rules are very simple. The appeal of the game is the high stakes and the fact that that house edge is one of the smallest of all casino games.

In larger casinos in Las Vegas or Asian resorts, baccarat tables are very popular and often attract so-called whales and high rollers because Baccarat is one of the few games that allows even very high stakes. The progression of the game, as you will see, is very simple and the player takes on the role of more or less the spectator.

The only way a player can intervene in the game is by choosing who to bet on - the Player, the Banker or the Draw. How many cards are then given to the player and how many bankers depend on the rules. At least on the most versions.

The basic rules are the same for all games. The goal of the game is to get the best value of 9 and thus win over your opponent. Each player (player and banker) receives two, possibly three cards. The player always gets their cards first.

Punto Banco is a game of chance. It has strict rules for pulling the third card for both the player and the banker. No experience or special strategy is required to play this variant.

In the two other versions, there is a possibility of choice available for both sides under specified conditions. The game can thus be influenced by experience or knowledge of the opponent. 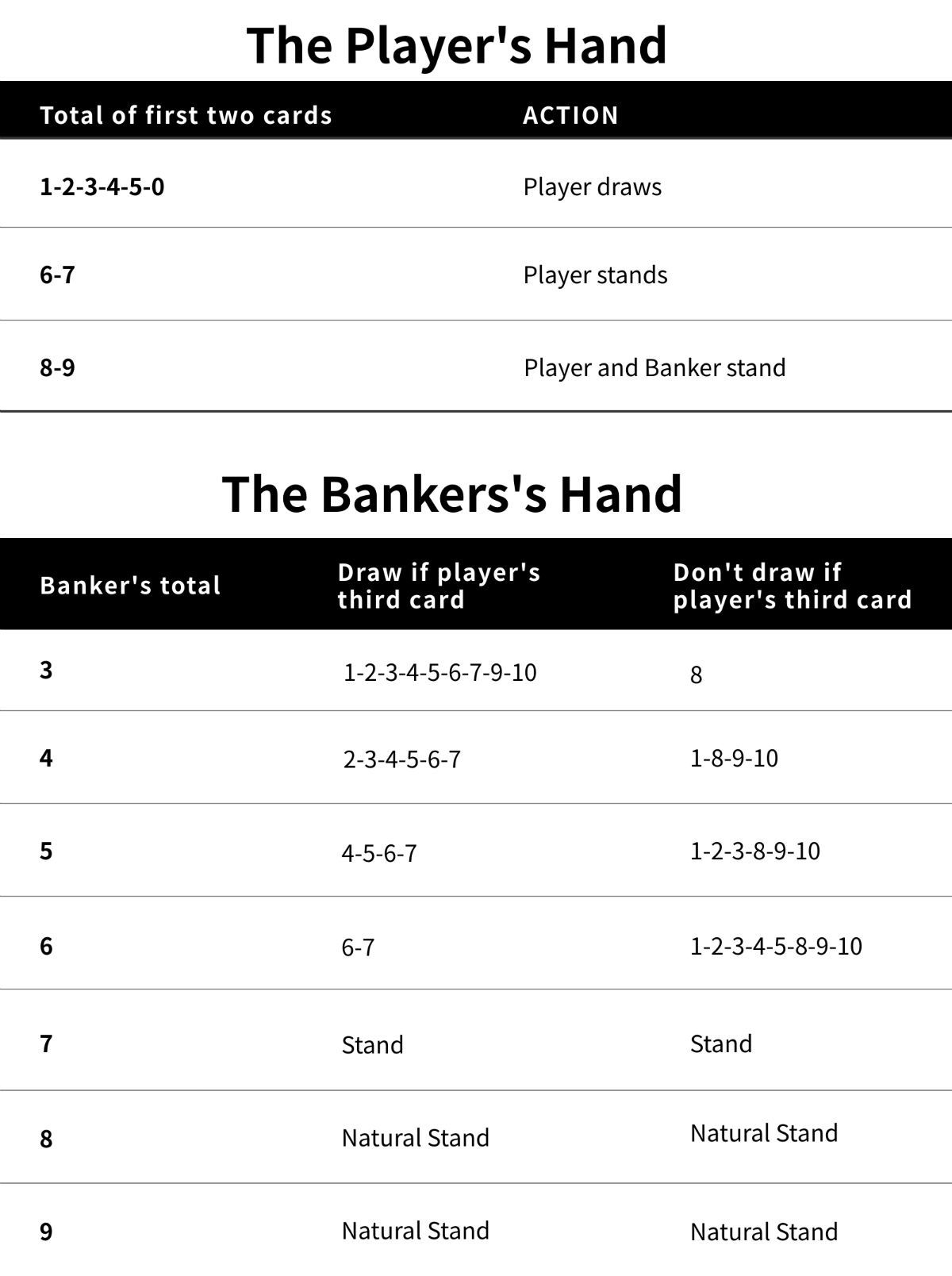 Cards and their value

We'll discuss the rules of baccarat for all three versions of the game. The goal of the game is to reach the sum of 9. Unlike Blackjack, in Baccarat you will never bust. If the sum of the card values is greater than nine, only the order of ones counts, the order of tens is not considered.

In Baccarat there are only three betting options available: bet on the banker, bet on a player or bet on the draw.

After the bets are closed, the dealer deals four cards - two for himself and two for the player. If the score sum on either or both sides reaches 8 or 9, it is a so-called "neutral" and no more cards are dealt. The same score on both sides means, of course, a draw.

If the sum is 0 to 5, the player must draw another card. Bankers' next move is based on the sum of cards in his hand. In this situation, banker's further moves are prescribed.

Variations in the different versions of Baccarat can be found in the term banker. In Punto Banco, the casino usually holds the bank. The role of the banker is symbolically performed by one of the players, especially handing out cards.

On the other hand, in Chemin de Fer one of the players holds the bank and the others play against him. The role of the banker in the game progresses around the table.

Baccarat payouts are simple. If you bet on a player, you will be paid a 1:1 win.

If you bet on the banker, you will be paid a 0.95:1 win. The casino always receives a 5% commission from each banker’s win.

House Edge in Baccarat is very low, ranging around 1.4%.

Online games of Baccarat usually offer a minimum bet of $1 and a maximum of $250. Check it out in your online casino.