Video poker is one of the games where it is possible to shift the advantage from the casino to the player. Today we focused on the Jacks or Better variant. You will learn about the frequency of individual winning combinations, but above all how to achieve ideal gaming conditions, ie when the value of the progressive jackpot is so high that it pays to play and erase the advantage of the casino. Moreover, in the end of the article we introduce you the best Jacks or Better strategy

The payout ratio of different hands increases depending on the frequency of the given hands in all video poker games. In Jacks or Better, the most common paying hands are pairs of Jacks, Queens, Kings, and Aces. They also have the lowest payout ratio - just 1:1. At the other end, the rarest hand in video poker, the royal flush, is also the highest paying, at 800:1. The exact frequency of each hand can be found in the table below.

The numbers in the "frequency" column show us the average occurrence rate of all hands:

The numbers in the "percentage of return" column show us the relative amount that contributes to the game's total return. 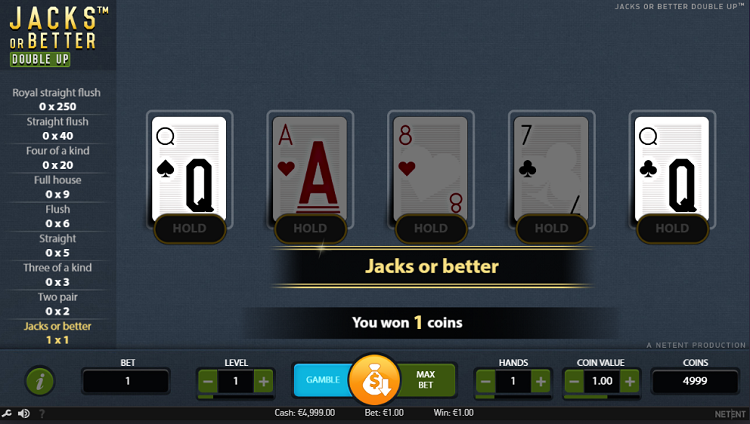 As you can see in the 'frequency' column, jacks or better combo comes once every 4.6 hands, and a royal flush is then on the other side of the leaderboard. It will only come up once every 40391 hands. Combining this number with the "return percentage" gives us an idea of what kind of win we can expect in a relatively short period of time. And that's very advantageous with Jacks or Better.

For a short game session, say only a hundred hands played, we can expect to play every hand at least once, except for the top three: four of a kind, straight flush, and royal flush.

We can include four of a kind in a 500-game session. It gives us excellent chances because, for a 500-hand game, the average return rate is already at 97%.

If we were to leave out only the top prize, the royal flush, we would get to 97.54%. As you can see, the straight flush contributes very little to the overall return.

However, you should not approach the game from a short-term perspective. Many players will play millions of rounds of video poker in their lifetime. So what does this short-term data tell you? They can help you figure out what your chances are during your favorite hour of video poker.

Royal flush turns the advantage to our side.

Let's leave frequency aside for now and focus purely on average return. If we play around with the numbers, we can figure out what a royal flush would have to have a payout ratio to get over 100%.

The base game versions, both online and offline, can be found as Jacks or Better progressive. These games collect a portion of your wagered money into a jackpot, and it is by this value that the royal flush payout is then increased. Once someone hits the jackpot, the amount is reloaded from scratch.

It is therefore essential for players to know when the machine reaches that 100% return. In this case, the advantage is already on his side, and he can start playing. Let's take a look at the numbers:

These numbers can be applied to any progressive game. A typical variation of our Jacks or Better video poker is when a flush pays only five credits, and a full house pays eight. This game is known as Jacks or Better video poker 8/5. If this game has a progressive royal jackpot, the average return can also go over 100%, but only if no one hits the jackpot for a long time.

To determine how much the royal flush payout needs to go up, we first need to adjust our numbers to account for the reduced full house and flush payout.

The optimal Jacks or Better Strategy

To the player's advantage, it is necessary to know and follow the optimal strategy for the house edge to tip over on Jacks or Better, or for that matter, on any version of video poker. Each poker game has its strategy and cannot be transferred between them. Probably the simplest is the optimal strategy for the version of Jacks or Better poker just described.

Experts just most often recommend starting with this one. For most of the other versions, all you have to do is tweak a few rules, and it's the same thing.

The following strategy is a simplified version of Michael Shackleford's Jacks or Better. To use the strategy, block the highest-ranked card combination in hand (a high card being a Jack, Queen, King, or Ace).

Boomerang casino
100% up to €500
Code not required
Get bonus