The Martingale system is undoubtedly the most famous and most commonly used betting system. It is the only winning system that ensures a profit in the long term. However, casinos have found a way to protect themselves against it. How the system performs in extreme situations, you will find out by reading the following article.

The most famous and most basic roulette system is the Martingale system. It is premised on a completely simple principle: we start with one bet, if we lose, we double our bet. Each time we lose, we double our last lost bet until we win. We can lose several times in a row, but when we win, we will recover all our lost bets plus one unit as a profit. Simple and very effective.

It is obvious that the system always works well. The probability of winning is 18/37 = 48.65 % in each spin. It is certain that we will strike it lucky and win sooner or later. The question is how long will the series of losing last? The main problem with this system is to have sufficient money to make the next bet because the big slumps always occur in a longer losing series.

However, let’s take a look at the progression of the system with an unlimited bankroll in the following graphs: 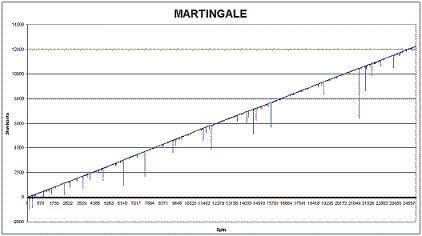 So it was a fully typical progression. The system constantly went to a profit. The only thing which could make us slightly uncertain were the “hairs” hanging from the curve and performing local slumps. These slumps even reached values of 100 000 to 1 000 000 units. It sometimes happened that these slumps were not so significant for a longer time and occurred when the system had gained some earnings, so it actually did not get close to a zero, as was shown in the second graph above.

It means that there is a great possibility of winning a lot of money from practically nothing. At the same time, it can be misleading. We can generally say that it can happen or not.

The Martingale betting with Loss/Stop factor

If we want to avoid the big slumps, we will try to apply some limitations, such as a maximum number of losses in the series. After a losing series, we will start to bet again from the beginning. Our limitations are for 5 and 10 losses. What will the progression look like? 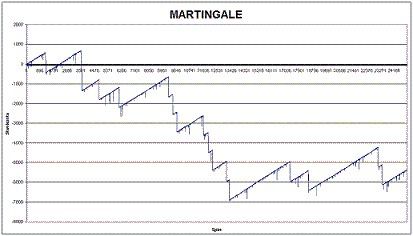 As we can see, the Martingale system sloped downward because of our limitations. The higher the limitation, the “more serrated” was the graph and there were more sequences of growth. However, basically the progression went below zero. We could nevertheless observe a longer series, in which the significant slumps did not occur and the system went to a plus.  Unfortunately, there were not very many such cases, which could pose the risk of losing money.

Never mind! We will try to apply the basic progression of the series. After each unsuccessful streak, we will increase the size of the bet by 1 unit, until we again go to a profit. Again we will apply our limitations to 5 and 10 losses. 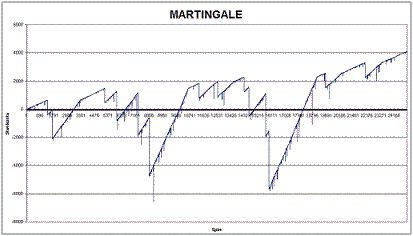 It was shown that the betting system became very unstable. In the long term, the progression headed downward and went below zero. However, in the medium term, the betting can be profitable (though not necessarily), so the result is that we do not know what to expect from it.

The Martingale System with Wait Effect

Let’s try one more thing called the Martingale Wait, a special version of the game, when you wait for the series of the opposite color (the same color has to come up, for example, 5 times in a row) and only then will you start to bet.  It is premised on the subjective feelings that the ball doesn’t remember where it came to a halt in the previous spins and has not a tendency to create too long a series.

More precisely, if the ball creates any series, we will make the series shorter and reduce the risk of losing money.  An interesting thing is to apply this type of game to the previous game with the limitations to 10 losses and with the linear progression. If we add a “wait factor of 5” (black has to come up 5 times in a row, then we will start to bet on red), the system appears as follows: 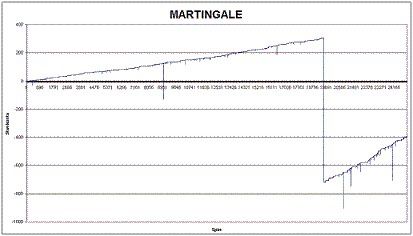 In most of the cases, the progression went to a profit practically without any risk, as was shown in the first graph. Roughly once per 100 000 spins, the system completely failed and its value fell well below zero (as shown in the second graph).

In addition, from the long-term point of view, the game is very safe and results in almost certain profit. The difficulty is that you have to spend most of the time of the spinning of the roulette wheel, waiting for a certain series, so the final profit is quite small due to the time spent in playing roulette (300 units per 25 000 spins – so about one year of relaxed playing for one hour per day).

The importance of the “wait effect” disappears in shorter “wait series”(when black comes up 20 times in a row, it isn’t helpful to wait for 2 spins, but it is helpful to wait for 8 spins). On the other hand, the system makes “stairs” in the progression in the long-term series and it happens that you have just 3-4 sizable bets for all of 25 000 spins.

This variant is unplayable by itself, but it can work well as part of some complex system, using a bigger amount of gambling systems and following other systems in the intervening time.